Spark Cache and persist are optimization techniques for iterative and interactive Spark applications to improve the performance of the jobs or applications. In this article, you will learn What is Spark Caching and Persistence, the difference between Cache() and Persist() methods and how to use these two with RDD, DataFrame, and Dataset with Scala examples.

Though Spark provides computation 100 x times faster than traditional Map Reduce jobs, If you have not designed the jobs to reuse the repeating computations you will see degrade in performance when you are dealing with billions or trillions of data. Hence, we may need to look at the stages and use optimization techniques as one of the ways to improve performance.

Both caching and persisting are used to save the Spark RDD, Dataframe, and Dataset’s. But, the difference is, RDD cache() method default saves it to memory (MEMORY_ONLY) whereas persist() method is used to store it to the user-defined storage level.

When you persist a dataset, each node stores its partitioned data in memory and reuses them in other actions on that dataset. And Spark’s persisted data on nodes are fault-tolerant meaning if any partition of a Dataset is lost, it will automatically be recomputed using the original transformations that created it.

Advantages for Caching and Persistence

Below are the advantages of using Spark Cache and Persist methods.

Below I will explain how to use Spark Cache and Persist with DataFrame or Dataset.

Spark DataFrame or Dataset caching by default saves it to storage level `MEMORY_AND_DISK` because recomputing the in-memory columnar representation of the underlying table is expensive. Note that this is different from the default cache level of `RDD.cache()` which is ‘MEMORY_ONLY‘.

Spark cache() method in Dataset class internally calls persist() method which in turn uses sparkSession.sharedState.cacheManager.cacheQuery to cache the result set of DataFrame or Dataset. Let’s look at an example.

Spark persist has two signature first signature doesn’t take any argument which by default saves it to MEMORY_AND_DISK storage level and the second signature which takes StorageLevel as an argument to store it to different storage levels.

This stores DataFrame/Dataset into Memory.

We can also unpersist the persistence DataFrame or Dataset to remove from the memory or storage.

unpersist(Boolean) with boolean as argument blocks until all blocks are deleted.

All different storage level Spark supports are available at org.apache.spark.storage.StorageLevel class. The storage level specifies how and where to persist or cache a Spark DataFrame and Dataset.

MEMORY_ONLY – This is the default behavior of the RDD cache() method and stores the RDD or DataFrame as deserialized objects to JVM memory. When there is no enough memory available it will not save DataFrame of some partitions and these will be re-computed as and when required. This takes more memory. but unlike RDD, this would be slower than MEMORY_AND_DISK level as it recomputes the unsaved partitions and recomputing the in-memory columnar representation of the underlying table is expensive

MEMORY_ONLY_SER – This is the same as MEMORY_ONLY but the difference being it stores RDD as serialized objects to JVM memory. It takes lesser memory (space-efficient) then MEMORY_ONLY as it saves objects as serialized and takes an additional few more CPU cycles in order to deserialize.

MEMORY_AND_DISK – This is the default behavior of the DataFrame or Dataset. In this Storage Level, The DataFrame will be stored in JVM memory as a deserialized object. When required storage is greater than available memory, it stores some of the excess partitions into the disk and reads the data from the disk when required. It is slower as there is I/O involved.

MEMORY_AND_DISK_SER – This is the same as MEMORY_AND_DISK storage level difference being it serializes the DataFrame objects in memory and on disk when space is not available.

DISK_ONLY – In this storage level, DataFrame is stored only on disk and the CPU computation time is high as I/O is involved.

Below are the table representation of the Storage level, Go through the impact of space, cpu and performance choose the one that best fits for you.

Some Points to note on Persistence

In this article, you have learned Spark cache and Persist methods are optimization techniques to save interim computation results and use them subsequently and learned what is the difference between Spark Cache and Persist and finally saw their syntaxes and usages with Scala examples. 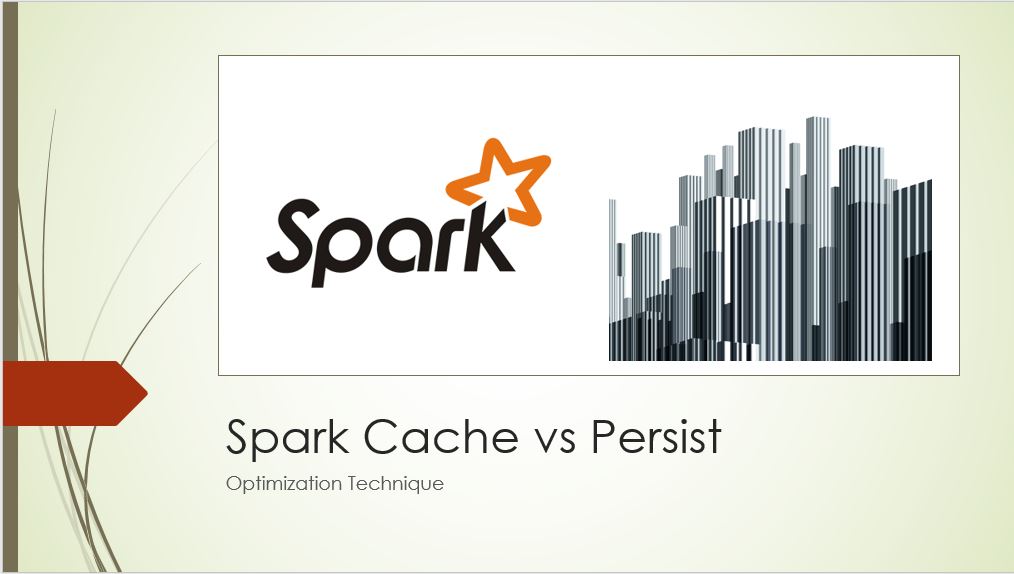