You can upgrade the Python pip package installer to the newest(latest) available version or to a specific version using the pip command itself. Yes, you have read it right, you can use the pip command to upgrade itself.

Python pip is a package manager that is used to install and uninstall third-party packages that are not part of the Python standard library. Using pip you can install/uninstall/upgrade/downgrade any python library that is part of Python Package Index.

pip is a PyPI package like any other package in python hence you can use pip command to upgrade its version. for example, upgrade Pandas Version to the new version available.

Before you upgrade, first let’s get the current pip version by running pip --version

On Windows, to upgrade pip first open the windows command prompt and then run the following command to update with the latest available version

Alternatively, you can also upgrade using.

3. Upgrade pip to a Specific Version

Sometimes you may need to downgrade or upgrade pip to a specific ver number, you can achieve this by the below command.

This updates the pip version to 18.1

To Upgrade it on a Linux server, you don’t have to use python instead just use pip command either with full or short form

If you have Python2 installed on your system, running pip install by default updates pip version on Python2 packages. In order to upgrade pip package on Python3, use the following.

Sometimes your current user may not have access to run pip commands in that case use sudo along with the pip command. You may also need a root password in order to run commands with sudo.

5. How to Upgrade pip version on Mac OS

Most of all commands explained in the above section with Linux also work for Mac OS. Below is one sample.

sudo will prompt you to enter your root password.

In order to update pip version with Anaconda distribution, open the Anaconda command prompt and enter the below command.

Go to the website https://pypi.python.org/pypi/pip and download the pip binary tar file. You can use wget command and the URL of the package to download. Below example downloads the pip version 21.2.3

In this article, you have learned pip command is used to update pip package version as pip is a PyPI package that is similar to other python packages. You also learned the pip commands to use for updates on Linux, Windows & Mac OS. 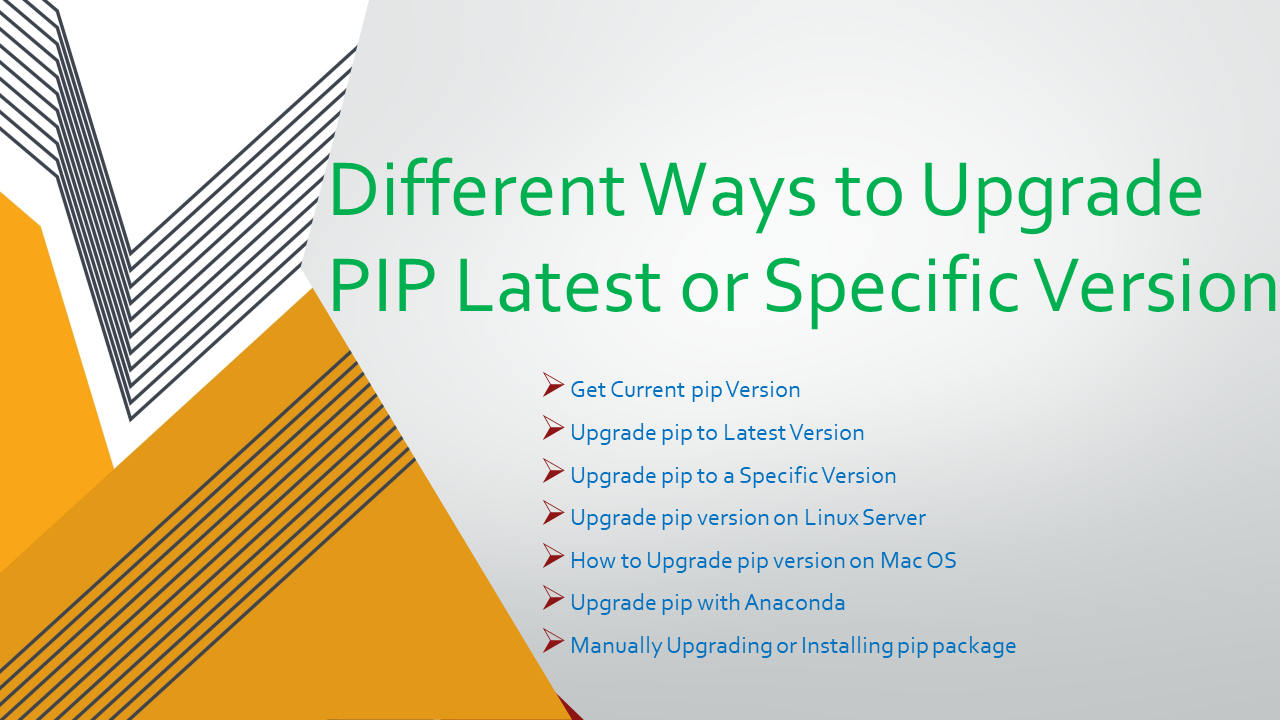