Hive Bucketing is a way to split the table into a managed number of clusters with or without partitions. With partitions, Hive divides(creates a directory) the table into smaller parts for every distinct value of a column whereas with bucketing you can specify the number of buckets to create at the time of creating a Hive table.

In my previous article, I have explained Hive Partitions with Examples, in this article let’s learn Hive Bucketing with Examples, the advantages of using bucketing, limitations, and how bucketing works.

What is Hive Bucketing

Hive Bucketing a.k.a (Clustering) is a technique to split the data into more manageable files, (By specifying the number of buckets to create). The value of the bucketing column will be hashed by a user-defined number into buckets.

Each bucket is stored as a file within the table’s directory or the partitions directories on HDFS.

Records with the same value in a column will always be stored in the same bucket.

In our example below, I will be explaining the first approach where I create Bucketing on top of the partitioned table.

Before jumping into the Advantages of Hive bucketing, first let’s see the limitation of Partition, with the partition you cannot control the number of partitions as it creates a partition for every distinct value of the partitioned column; which ideally creates a subdirectory for each partition inside the table directory on HDFS.

If you have too many distinct values on the partitioned column, you will end up with too many directories on HDFS which leads to higher maintenance for Name Node.

To create a Hive table with bucketing, use CLUSTERED BY clause with the column name you wanted to bucket and the count of the buckets.

Now let’s load the csv file into the table, since our partitioned column state is the last column on the input file we can directly load the data into the table without needing to create a temporary table.

Below examples loads the zipcodes from HDFS into Hive partitioned table where we have a bucketing on zipcode column.

On below image, each file is a bucket.

On above image, each file is a bucket which contains records for that specific bucket.

Since our zipcode is partitioned on state and bucketing on zipcode, if you use these columns on where condition your query returns faster results.

How Hive Distribute the Rows Across the Buckets?

I got this from Hive wiki.

In general, the bucket number is determined by the expression hash_function(bucketing_column) mod num_buckets. (There’s a ‘0x7FFFFFFF in there too, but that’s not that important). The hash_function depends on the type of the bucketing column. For an int, it’s easy, hash_int(i) == i. For example, if user_id were an int, and there were 10 buckets, we would expect all user_id’s that end in 0 to be in bucket 1, all user_id’s that end in a 1 to be in bucket 2, etc. For other datatypes, it’s a little tricky. In particular, the hash of a BIGINT is not the same as the BIGINT. And the hash of a string or a complex datatype will be some number that’s derived from the value, but not anything humanly-recognizable. For example, if user_id were a STRING, then the user_id’s in bucket 1 would probably not end in 0. In general, distributing rows based on the hash will give you a even distribution in the buckets.

How to Decide the Number of Buckets?

In summary Hive Bucketing is a performance improvement technique by dividing larger tables into smaller manageable parts by using the hashing technique. Bucketing can also be done on a partitioned table to further divide. 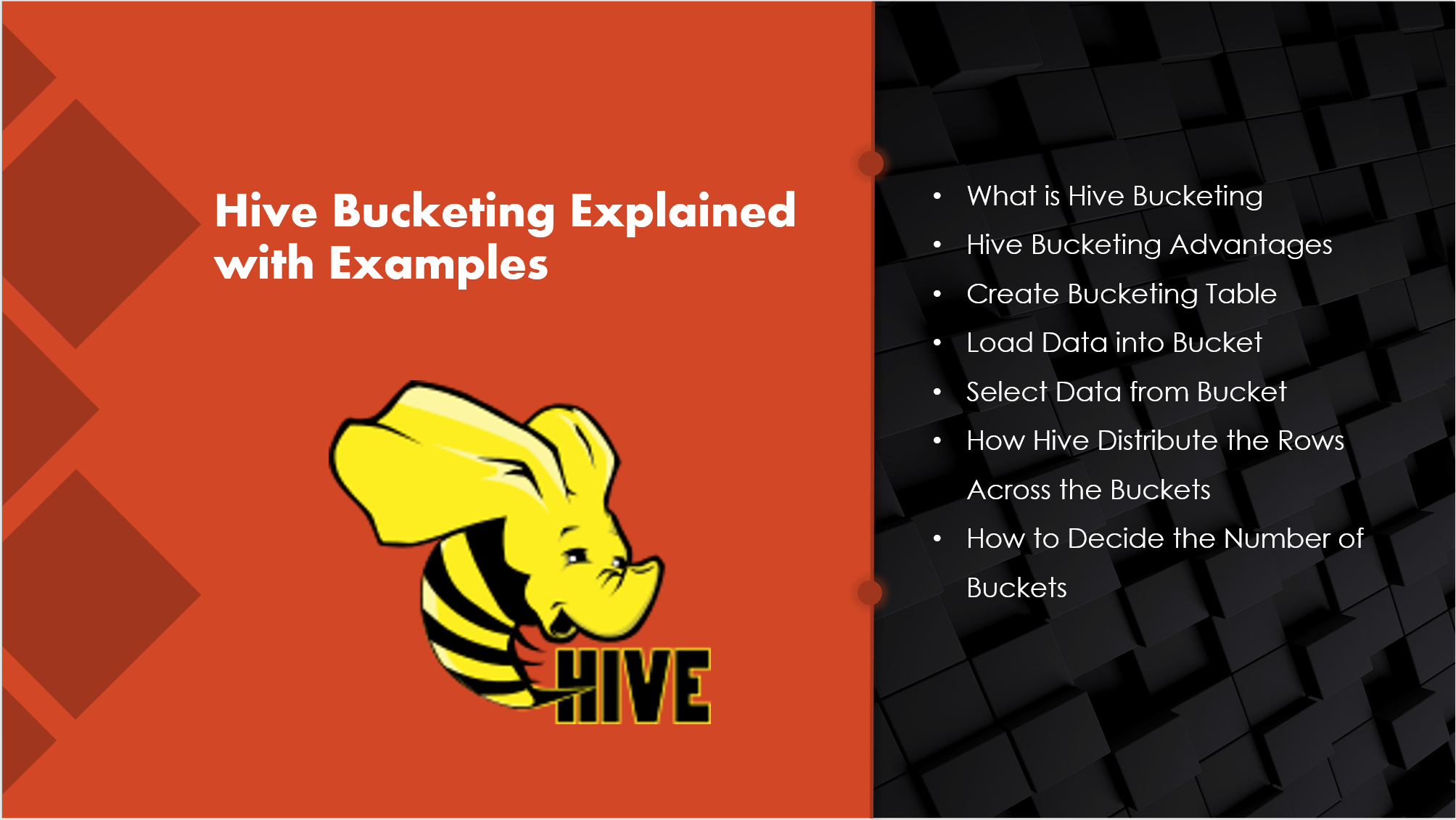