Every sample example explained in this pandas tutorial is tested in our development environment and is available for reference.

All pandas DataFrame examples provided in this tutorial are basic, simple, and easy to practice for beginners who are enthusiastic to learn pandas and advance their career in Data Science, analytics and Machine Learning.

Note: In case you can’t find the pandas DataFrame examples you are looking for on this tutorial page, I would recommend using the Search option from the menu bar to find your tutorial and sample example code, there are hundreds of tutorials in pandas on this website you can learn from.

2. What is Pandas DataFrame?

In very simple words Pandas run operations on a single machine whereas PySpark runs on multiple machines. If you are working on a Machine Learning application with larger datasets, PySpark is the best to use as it perform operations many times(100x) faster than Pandas.

PySpark is also very well used in Data Science and Machine Learning community as there are many widely used data science libraries written in Python including NumPy, TensorFlow. Also, PySpark is used due to its efficient processing of large datasets. PySpark has been used by many organizations like Walmart, Trivago, Sanofi, Runtastic, and many more.

PySpark is a Spark library written in Python to run Python applications using Apache Spark capabilities. Using PySpark we can run applications parallelly on the distributed cluster (multiple nodes) or even on a single node.

Spark was basically written in Scala and later on due to its industry adaptation, its API PySpark was released for Python using Py4J. Py4J is a Java library that is integrated within PySpark and allows python to dynamically interface with JVM objects, hence to run PySpark you also need Java to be installed along with Python, and Apache Spark.

Additionally, For the development, you can use Anaconda distribution (widely used in the Machine Learning community) which comes with a lot of useful tools like Spyder IDE, Jupyter notebook to run PySpark applications.

You can learn PySpark from the following tutorials. And also read more on pandas vs PySpark differences with Examples.

4.1 How to Decide Between Pandas vs PySpark

Below are a few considerations when choosing PySpark over Pandas.

In this section of the pandas DataFrame tutorial let’s see how to install& upgrade pandas. In order to run pandas, you should have python installed first. You can install python either directly downloading from python or using Anaconda distribution. Depending on your need, follow the below link’s to install Python, Anaconda, and Jupyter notebook to run pandas examples. I would recommend installing Anaconda with Jupyter as a good choice if you are intended to learn pandas for data science, analytics & machine learning.

pip (Python package manager) is used to install third-party packages from PyPI. Using pip you can install/uninstall/upgrade/downgrade any python library that is part of Python Package Index.

Since the pandas package is available in PyPI (Python Package Index), we should use it to install pandas latest version on windows.

This should give you output as below. If your pip is not up to date, then upgrade pip to the latest version.

Anaconda distribution comes with a conda tool that is used to install/upgrade/downgrade most of the python and other packages.

In order to upgrade pandas to the latest or specific version, you can use either pip install command or conda install if you are using Anaconda distribution. Before you start to upgrade, you the following command to know the current version of pandas installed.

Below are statements to upgrade pandas. Depending on how you wanted to update, use either pip or conda statements.

If you use pip3 to upgrade, you should see something like below.

If you installed Anaconda, open the Anaconda command line or open the python shell/command prompt and enter the following lines to get the version of pandas, to learn more follow the links from the left-hand side of the pandas tutorial.

This opens up Jupyter Notebook in the default browser.

Now select New -> PythonX and enter the below lines and select Run.

You can also run pandas from any python IDE’s like Spyder, PyCharm e.t.c

In this section of the tutorial, I will explain different ways to create pandas DataFrame with examples.

One of the easiest ways to create a DataFrame is by using its constructor.

Since we have not given labels to columns and indexes, DataFrame by default assigns incremental sequence numbers as labels to both rows and columns, these are called Index.

Column names with sequence numbers don’t make sense as it’s hard to identify what data holds on each column hence, it is always best practice to provide column names that identify the data it holds. Use column param and index param to provide column & row labels respectively to the DataFrame.

By default, pandas identify the data types from the data and assign’s to the DataFrame. df.dtypes returns the data type of each column.

You can also assign custom data types to columns.

Another most used way to create DataFrame is from the dictionary.

In real-time we are often required to read TEXT, CSV, JSON files to create a DataFrame. In pandas, creating a DataFrame from CSV is pretty simple.

In order to explain some basic operations with pandas DataFrame let’s create it with some data.

Note that our data contains np.nan, None, and empty values. Note that every column in DataFrame is internally represented as pandas Series.

DataFrame has several properties, in this pandas DataFrame tutorial I will cover most used properties with examples.

query()/apply()/loc[] – These are used to query pandas DataFrame. you can also do operator chaining while filtering pandas rows.

insert()/assign() – Adds a new column to the pandas DataFrame

By using assign() & insert() methods you can add one or multiple columns to the pandas DataFrame.

Pandas DataFrame.rename() method is used to change/replace columns (single & multiple columns), by index, and all columns of the DataFrame.

drop() – drop method is used to drop rows and columns

Below are some examples. In order to understand better go through drop rows from panda DataFrame with examples. dropping rows doesn’t complete without learning how to drop rows with/by condition

Now let’s see how to how to drop columns from pandas DataFrame with examples. In order to drop columns, you have to use either axis=1 or columns param to drop() method.

If you wanted to drop duplicate rows from pandas DataFrame use DataFrame.drop_duplicates()

In this section of the python pandas tutorial I will cover how to combine DataFrame using join(), merge(), and concat() methods. All these methods perform below join types. All these join methods works similarly to SQL joins.

pandas.merge() and DataFrame.merge() works same way that merges two or more DataFrames. When doing a join on columns, it ignores indexes. When joining on the index, the resultant DataFrame contains indexes from sources. When no params are used, by default join happens on all common columns.

Alternatively use join() for joining on the index. pandas.DataFrame.join() method is the most efficient way to join two pandas DataFrames on row index.

12. Iterate over Rows to perform an operation

Pandas DataFrame provides methods iterrows(), itertuples() to iterate over each Row, where iterrows() returns (index, Series) where the index is an index of the Row and Series is data or content of each row and itertuples() returns all DataFrame elements as an iterator that contains a tuple for each row. itertuples() is faster compared with iterrows() and preserves data type.

Below are some of the articles that I have covered to handle None/NaN values in pandas DataFrame. It is very important to handle missing data in Pandas before you perform any analytics or run with machine learning algorithms. 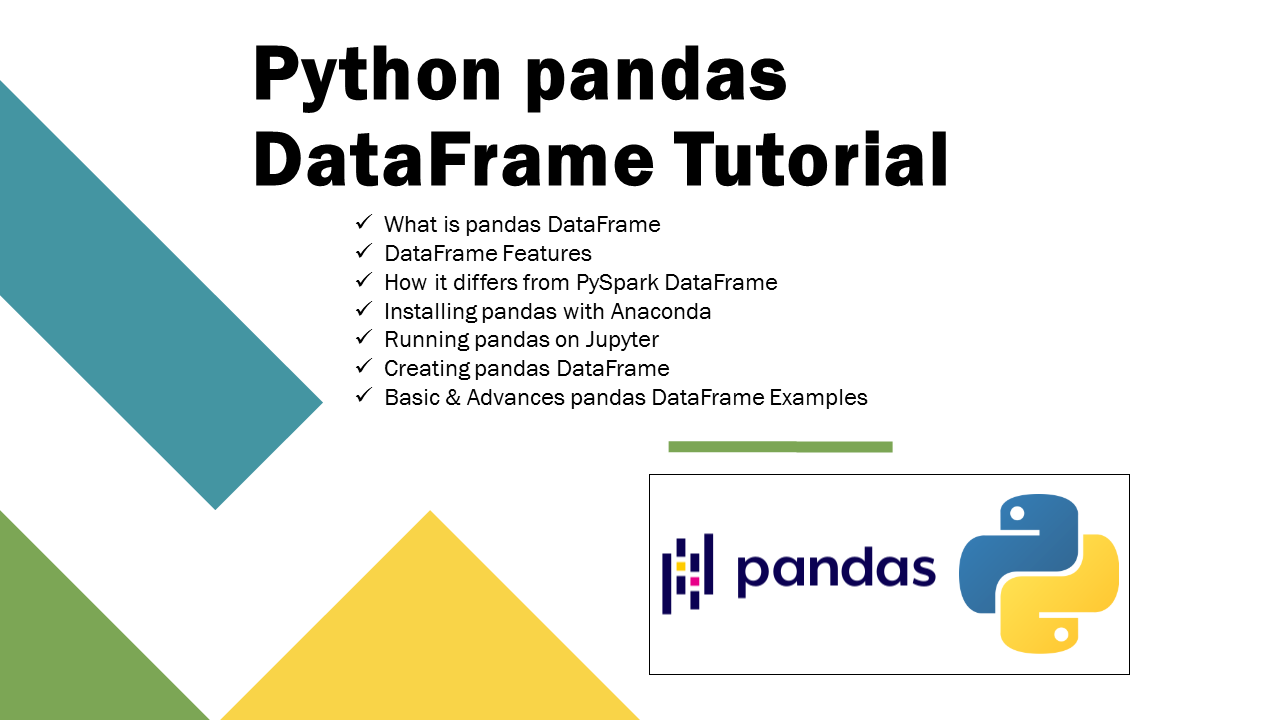